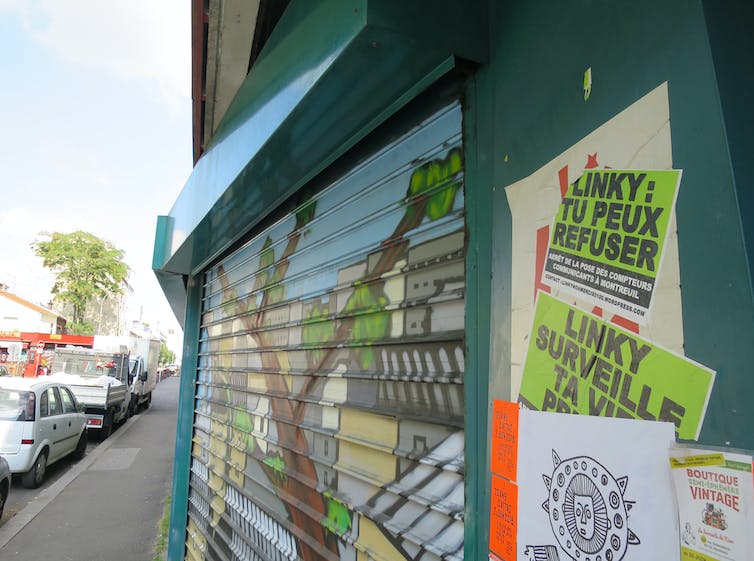 “No Linky” posters in Montreuil, near Paris. The first one reads “Linky: You can say no.” The second reads “Linky spies on your private life.” Some residents fear data surveillance rather than looking at possible advantages of smart meters.
Carole Salères, CC BY-SA

THE roll-out of electricity smart-metering devices is well under way in the European Union: a recent official report indicates that most EU countries are on track to have 80% of households equipped by 2020 (European Commission, 2016). Yet the roll-out is facing significant resistance in some countries, especially in France – the smart meter to be deployed in the French market, “Linky”, is facing a widespread and persistent “anti-Linky” campaign.

In some towns and neighbourhoods, anti-Linky stickers are being distributed and slogans are tagged on walls. A national “Stop Linky” day was announced for May 5, and a number of municipalities organised informational meetings, allegedly resulting in 500 recommending that residents refuse to allow the smart meters to be installed.

Reasons for the resistance

There are a number of reasons that households resist the installation of smart meters. Even if the devices are officially installed for free, consumers are fearful that expense will be reflected in future price increases. Indeed, a July 2018 report by the Cours des Comptes (France’s public accounting office) criticised the smart-meter program, saying that it was likely to be more beneficial for the utility company, Enedis, than consumers.

Residents also have privacy concerns – who will read their consumption data, and what will be done with it. Stories have also circulated about hackers entering personal computers through smart meters. There are also fears of health dangers, even if, ironically, smart meters emit the same amount of radiation as the previous generation of meters, and less than a number of common household devices.

There are thus valid concerns and reasons to reject smart meters. But in the end, households who resist these devices do so because they don’t see what it’s in it for them – the benefits all seem to be on the side of the utility companies or networks. Using smart-meter data, utilities will be able to better forecast demand and manage the electricity grid. Households are given no argument for the adoption of these devices, besides being promised better service.

In contrast, a main motivation for the European Union to mandate the roll-out of these devices appears to be potentially beneficial for households. By providing real-time feedback about electricity consumption, smart meters are supposed to help consumers reduce their electricity bills. Is this only wishful thinking or pure marketing, or can smart meters really help reduce electricity bills?

This is the question we sought to answer in an August 2017 research paper.

In the late 1990s, the first studies looking at the impact of providing feedback on electrical consumption found huge effects: households receiving feedback cut down their consumption by as much as 15% (as reported in two literature reviews, here and here.

Numbers in the range of 10% to 15% sounded too good to be true, and indeed probably were. These early studies shared some characteristics that likely inflated the benefits due to receiving feedback. First, they often relied on small volunteer samples or tech-savvy households – for example, employees of high-tech companies. Of course, when a household volunteers to receive feedback, the residents are more likely to want to reduce their electricity consumption than the average Joe-and-Jane household.

Second, these studies only observed the effects of receiving feedback on a short time frame (typically a few weeks). Of course, when people get the new device in their house, they use their new toy and reduce their consumption. But will they keep doing so once the excitement has faded?

Even after controlling for seasons, day of the week, time of day, and household characteristics (such as number of people in household, income, education) as well as house size and types of appliances owned, we observed a reduction in electricity consumption of 5% over the 11-month period. While this is not the 10% to 15% decrease reported by earlier studies, it’s still a solid reduction.

Our results also show that the smart meters reduced both peak load (households’ peak in electricity consumption) and base load (periods of lowest consumption). The fact that both were affected suggests that feedback on energy consumption was likely to have prompted investments in more energy-efficient technologies (such as low-energy refrigerators or freezers) as well as to stable behaviour changes (such as switching off or reprogramming appliances).

It would be interesting to know whether the anti-Linky households in France would change their mind if they knew of these benefits.

Interesting to see resistance to smart meters is Europe wide. I and a number of friends have not had the meters installed, my initial reason for rejection was that I'd read in an early article that your supplier could disconnect your supply remotely. I don't know what French Utility providers customer service is like but the UK providers consistently prop up the customer satisfaction league. So I'm quite happy to provide my monthly readings and until I'm convinced there's something it in for me "Thanks but No Thanks".