The working life of la Croix-Rousse

The working life of la Croix-Rousse

It’s also the silk capital of the world. And anyone who delves into the history books (or Wikipedia, as it were) will find that the city gained that distinction thanks to the nimble fingers of the canuts, or silk workers, of la Croix-Rousse.

Freelance journalist Robert Luc spends his days educating the Lyonnais public on the history of this monetarily and culturally rich quarter.

His main workload comes from Le Progrès, a daily newpaper for the Burgundy, Rhone-Alpes area. But just about every day, he sets aside a couple of hours to give tours of the Croix-Rousse to anyone who’s willing to watch and listen.

His reason is simple: Croix-Rousse is an interesting place! 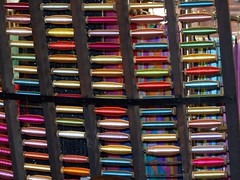 Maison des Canuts, la Croix-Rousse
It was the canuts of la Croix-Rousse in 1831 who raided downtown Lyon in demand of fair working conditions. This, the first of three revolts, culminating with the last insurrection in 1848, paved the way for modern workers’ rights.

These ideas were adopted worldwide, but they’re palpably French. And they originated from no place other than la Croix-Rousse.

"Everything that concerns workers’ [rights] stemmed from the revolt of 1831," Robert said. "The communal experience took shape in la Croix-Rousse. After 1848, Marx, Blanqui, everyone thought of the difficulties of workers and the conditions they faced."

After the French Revolution at the end of the 18th Century, the French as a whole took a much more liberal mindset than anyone had in history.

This led to the heralded Siècle de Lumières in the 19th century, arguably featuring some of the greatest thinkers in history. La Croix-Rousse was right in the middle of it.

"During the 19th Century, from 1820 to 1866, Lyon was the place, the city that had all the power, concerning the philosophical foundations that went through all of Europe," Robert said. 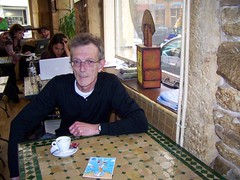 Robert Luc enjoys a coffee
The 64-year-old Luc, a native of la Croix-Rousse himself, frames his tours around the history of the canuts in the 1800s, as well as the architecture of the area.

Many of the buildings lining the streets of the area come not from the Haussmann-esque of the general French city layout in the 1850s, but rather date back about 50 years before, to the beginning of the 19th century.

Robert starts his tours at the historic Maison des Canuts on the rue d’Ivry, and weaves his way down the quarter, touching on the original purposes for the buildings and how they were used, yesterday and today.

Along the way, he’ll answer questions like why the area is called la Croix-Rousse, for instance. 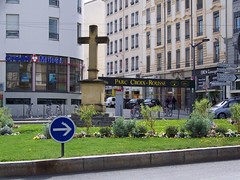 A traditional cross of the area
It’s because of the stone crosses the Christians put there in the 1400s. The stone is called, but in fact, it is slightly reddish in colour – much like a Breton’s hair is 'red'.

But it’s the buildings’ mezzanines in particular, Robert says, that became an attraction to home buyers in the last 20 years or so.

Beforehand, la Croix-Rousse was known as sort-of a bleak, relatively ugly workers’ quarter. But then the spaces formerly used by the canuts to house their massive machinery became attractive, luxurious mezzanines with lots of room.

"Especially for an old quarter, it’s an altruistic yet inviting environment," Robert said. "Here, you have your computer plugged into the wall, but that wall is made of 19th century stone."

The area also brings with it a sort of 'small-town' feel. There’s a real sense of identity, not an easy task in a suburb of the third-largest city in France.

"People wanted, about 15 to 20 years ago, for it to become like a small village," Robert said. "There was a dimension where the individual wasn’t anonymous. All of that gives a certain climate of individuality. You're not anonymous here."

Then again, a phenomenon unbeknownst to the 1831 revolutionaries may befall Robert Luc’s beloved Croix-Rousse. 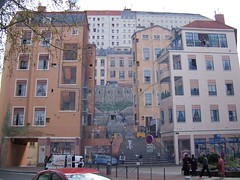 Artistic touch with giant mural
There is a sort of balance in the neighbourhood that gives it a real local feel.

Lots of different people from many different backgrounds flood the streets day in and day out, all unified by one tight-knit community, and founded on the solidarity of their ancestors and the sturdiness of the quarter’s historic structural design.

"We have a sociological equilibrium," Robert said emphatically. "But now people can [because of expensive housing prices] leave their homes for greener pastures. And if that continues, the village’s charm will dissipate. People who come here will find a dead quarter."

Robert cites the example of Montmartre. Montmartre was to Paris as la Croix-Rousse is to Lyon. But now, the populace of the area has gone extremely one-dimensional, with the rich driving out the poor for a view up on the perch of a big city.

"The only way to get it back is to reserve the places for the old, and poor, etc," Robert said. "Because, when there aren’t any more old people in the streets, it’s no longer a village. It’s Disneyland."

You can visit Robert Luc's French language website for more on the area, and for a collection of photographs taken by Zach visit his page of La Croix-Rousse images on Flickr.

I would like to present you this amazing websites with more than 5000 pictures of the Croix-Rousse.