Life in the deep end on a banlieue

« Health and emergency services | Main | A thanks to you all »

Life in the deep end on a banlieue 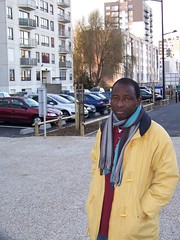 As a member of staff at a municipal pool in Le Havre, he greets all soon-to-be swimmers with a calm smile and a pleasant charm.

And as an African immigrant living in a particularly notorious French banlieue, his story turns out to be strikingly similar to those living around him.

Mohammed Diallo has only been in Caucriauville since 2005, when he followed his wife back to her home town of Le Havre.

The Senegal native may have found a steady job and place to hang his hat here in what some lovingly call 'Caucri City', but that’s not to say he thinks of it as home.

"If I had money in my pockets, and the real means, I would go back to Senegal and work there," Mohammed said. "I would prefer it."

Even so, it’s clear that Mohammed likes his job at the pool. His calm smile is no façade. The 41-year-old likes the openness the pool presents. There are no barriers, no social or economic status requirements. If you pay your €3, you can have a swim.

"[At the pool], there are all the categories," Mohammed said. "There are French. There are Africans. Everyone can learn to swim, and the pool is there for everybody." 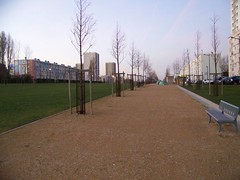 'Caucri City' in the east of Le Havre
Of course, there’s another reason he likes working at the pool: its simplicity. He works, he gets paid. It’s something that most of us from the West take for granted: there’s always work to be had somewhere.

But in Senegal, that’s not necessarily a guarantee. The idea of a ‘modern life’ eludes much of the country’s population.

There is, for example, a river in Dondoi, Mohammed’s home village, but the city doesn’t have the machinery to make use of the water, preventing the village’s inhabitants from something we take for granted – running water.

"We have really fertile lands, but no machines to do farming," Mohammed said. "The government doesn’t have the means of helping us start all that up. And it’s because of that that you’re obligated to leave – that’s the reason for all the immigration."

Many Africans leave for France, seeking the endless wonder they’ve heard about from their peers. It’s like the American dream with baguettes.

But couple the influx of new immigrants with the fact that France is a very proud nation with a pre-existing racism issue, many new immigrants arrive to face a totally unforeseen mass of obstacles.

"I’m here, I work, I pay my rent, so [local French people] are OK with that – but everywhere, there’s still racism," Mohammed said. "Some people still think immigrants are coming just for handouts, so they say ‘get out, go back home’. 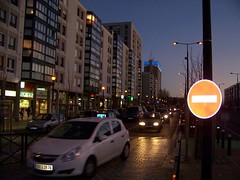 Evening traffic heads home in Caucriauville
"And that’s not just specific to France, that’s all over the world. There are some locals here who don’t do shit, and of course there are immigrants who do that too. But still, normally, when people come here, it’s to work and to make a living."

Of course, the other problem is that France is getting just a bit cluttered. France’s infernal work permit and visa processes easily rival those of the United States, a country that has all but shut down its borders to non-specialized workers.

Luckily, Mohammed went through all the correct channels to get his right to live in France. He has a work visa, permitting him to stay and live with his wife, but he hasn’t applied for citizenship.

"Visas allowing Africans to work in Europe are hard to come by," Mohammed said. "They give visas to rich people, for business, or to students. But for the rest of the population, it’s really difficult.

"My procedure to get a visa was pretty long, but after that, it wasn’t really all that difficult, because I respected all the rules. They need to verify whether or not what you’re saying is right."

And Mohammed knows just how important having all your papers can be. Before he moved to France, he received his Bac in education, as an Arabic teacher. He then found a job in Mauritania, but then, amid a racial war he was forced to go back home to Senegal to find work.

He found a couple of posts at private schools, where you need no educational certification to teach, so that worked out for the time being.

Not really wanting to go to school for another four years just to get a job teaching in France, he just tried to get something to pay the bills.

Even that, however, turned out to be tough. All-told, he went more than a year without a job before landing his current position in April 2007. Luckily, he had France on his side.

Here, if you don’t have any money, and are skilled, the government will help you find a job somewhere. Even if you’re not that skilled, the country will pay for your education and training.

According to Mohammed, you can write down your competences and put it on to a CV destined for a 'boîte de travail', or work box, and the ANPE will help you find something. They can even pay for your train tickets to help apply for jobs within your region.

"In France, you have the right to a formation (training course)," Mohammed said. "If you’re competent, don’t stay in bed and get out there, the government will help you find something."

By this process, Mohammed Diallo got a solid job, working with people in an open environment, enriching the lives of those around him. Not bad, for an immigrant who had no proof of even a high school diploma to account for his abilities.

And although France may not be Mohammed Diallo’s home at heart, it is a home for now. Just like it is for about five million other immigrants.

"I have to speak the truth," Mohammed said. "Of course France isn’t perfect, but it definitely has some good things to speak of. Everyone needs to live equally, with the respect of others. Only that way can France really advance."

I stumbled upon a good business site I want to share with you the Young Entrepreneur Society from the www.YoungEntrepreneurSociety.com. A great documentary about successful entrepreneurs.