A festive stroll around Strasbourg market

« Photographs from around France | Main | French sites to discover »

A festive stroll around Strasbourg market AT this time of year the market in Strasbourg draws thousands of visitors and events take place into early January, here Zach Spittler takes a tour.

Ahh, the smells of Christmas. Eggnog, hot chestnuts, candy canes, the distinct aroma of a pine Christmas tree filling the family room. Until this week, nothing else even compared. Those scents had history and tradition behind them, leaving them unparalleled by any other Christmas fragrance. Then I went to Strasbourg.

Strasbourg is internationally famous for its Christmas market, or Christkindelmarïk, and for good reason. The little shops lining the streets are truly something to behold. Each one has something special to offer. But it was the smell of vin chaud that will follow me for the rest of my life. One whiff and I knew I was truly smelling Christmas.

If you’ve never had vin chaud before, it’s not a difficult problem to fix. All you need is a pot of red wine (doesn’t have to be the snobby stuff), a few lemons and oranges, a few other spices and a flame.

It tastes great, and all those seasonings give the drink an almost tangible warmth, perfect for traversing the streets of Alsace. 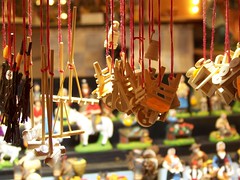 Strasbourg toys, by ZSpittler
Walking through the marché de Noël in Strasbourg, I felt I had transformed into one of Father Christmas’ elves perusing the toy factory.

Every store owner seemed friendly, and the present populace had the laid-back sensibility one would expect from a town touched by French and German traditions. Even on Christmas Eve, nothing seemed too rushed, by patron and worker alike.

One such store hand, Sylvie Colling, who was doing the marché for the first year, doled out her personal vin chaud, along with hot, seasoned orange juice with cinnamon. 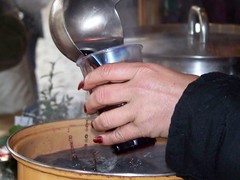 Sylvie's vin chaud by ZSpittler
Also filling in the spaces of her stand were German pretzels (sugared and salty varieties), doughnuts, and kouglof, a traditional Alsatian cake. Sylvie said she’s liked her experience this year, but she won’t come back next year, for one simple reason.

"It’s too cold, and working 12-hour days is too much in this weather," Sylvie said. It’s true, to open at 10am she had to start warming up and preparing the vin chaud and orange juice an hour earlier. (I might be on her side if they weren’t so infinitely delicious!)

The baked goods came from the owner, who owns a restaurant nearby. She was the only one who made the hot drinks, only two other people come to help her out during the six-week event. Even so, Sylvie kept a serene air of calmness.

But tranquillity is the last thing one would think of when you stop by Chez Mathilde, who sells "the best vin chaud in the world", according to her partner in crime Françoise Bach; the name was fitting, because the duo seemed to be cooking up masterpieces at every given millisecond. 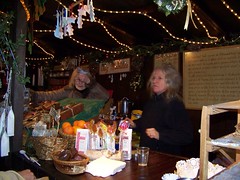 Chez Mathilde by ZSpittler
Mathilde Bonichot has established her 21-year-old stand as a cornerstone of the Strasbourg Christmas market, gaining a lot of attention, especially from reporters like this one. She says the reason she got started was simple.

"I didn’t have anything to do during the winter," she said. Mathilde also has a stand that sells various summer fruit specialities during the warmer months, but that left half her year open. So she and her husband started Chez Mathilde, and they come back every year without question, just to see her food and drink make people happy.

The speciality product of Chez Mathilde comes in the form of hutzelbrot, a sort of sugary cake with several kinds of fruit flavours. There always seemed to be a crowd waiting for some hutzelbrot accompanied by a vin chaud or some hot, freshly-prepared tea.

She’s different, and she knows it, but she has the distinct charm of a paysanne in her natural element. And that’s probably why people like Parisian Lionel Dubourg, 36, made a point of stopping by her lively stand.

"You need to try to discover the unknown world," said Lionel. Every Christmas, he finds "another little corner" of France to visit with his 10-year-old son Raphaël.

And the Christkindelmarïk in Strasbourg gave him yet another means of further discovering a country that’s physically only a 15th the size of the United States but huge in cultural tradition. Lionel couldn’t resist talking with Mathilde, to pick her brain about her craft and her life in Strasbourg.