Saving the trees from French bureaucracy Les pauvres: destined to become a RIB in a French filing cabinet

WHEN student teacher Zach Spittler arrived in France full of enterprise and endeavour, he wasn't to know that the Kafkaesque world of French bureaucracy lay in wait.

Here, with tongue firmly in cheek, Zach takes you through the first weeks of his life in France and a few of the simple tasks he faced, like registering to teach and hooking up to the internet.

Those poor, poor, French trees. All of them brutally killed in the name of France’s insatiable addiction.

No, it’s not coffee, and as good as French cheese is, I don’t see ominous-looking Frenchmen poking around damp street corners with trench coats full of Roquefort and Reblochon, well, not that many anyway.

In truth, the strongest addiction I’ve noticed in this country is a steadfast addiction to paperwork. Lots and lots of paperwork.

I arrived in France at the end of September, looking forward to my short-lived life as an English language assistant at two collèges in Le Havre. I absolutely love my job – the colleagues are magnificently nice, and the students are great.

But unfortunately, it’s not as simple as just hopping the ocean, showing up in a classroom, sharing some knowledge about baseball and Dr. Martin Luther King Jr. for seven months, then leaving.

It’s completely the opposite. To be a language assistant in France, you must first jump through an innumerable number of hoops.

But most importantly of all, you have to be a murderer. Not the Charlie Manson kind; the Amazon deforestation kind. I should probably be sent to prison for the number of trees that have been killed in the name of my presence in France. Yes, I could just claim I was following orders, but it didn’t work for former Nazi soldiers, and it surely won’t work for English assistants from America.

But trust me, it wasn’t my choice.

Allow me to explain; I’ll start from the beginning. It was November 2006, and I was compiling materials at my university to apply for this incredibly enticing assistantship program I had found out about. I remarked at how extensive the application process was.

However, just a mere 15 pages or so later, I had checked all the correct boxes and filled in all the correct blanks to send said application to Washington D.C. for review. I had it made in the shade, right? Wrong.

Once I was accepted into the program (words can not sufficiently explain how incredibly excited I was), I found out about all the crap I would need to do to become “official” as a language assistant. First, there was the visa application, a standard process.

But then, I had to attain a notarised translation of my birth certificate, and wait for my official arrêté de nomination to arrive in the mail – a piece of paper that is absolutely required to do anything, though it doesn’t make much sense to me.

I have several in my bag, all of them different: a signed one, a stamped one, thousands of photocopies, one that I signed, and one that says “fiesta” on it that serves me tacos any time I ask. Needless to say, I’ve had to clean a lot of salsa out of my bag.

The information I got in the mail also informed me that I would have to do a bunch of things upon arrival in l’Hexagone. For example, I would need an account at a French bank, where I would get the ever heralded RIB – Relève d’Identité Bancaire.

I just call it the R.I.P., because once someone has it, he or she can do absolutely anything with your bank account. They can put in funds, take them out (without any form of written approval), turn your cheques pink, and basically anything else that could totally ruin your life.

It wouldn’t be so bad if I didn’t need the RIB to do absolutely anything commercially. But as it is, you can’t even get by just knowing your account number and actually proving your identification. Without a RIB, you’re dead.

Then there’s the Carte de Séjour (CDS). What lovely business this was, and still is. 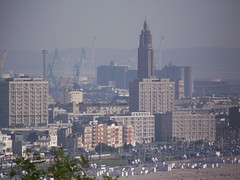 Le Havre, bastion of bureaucracy
By ZSpittler
See, as with any bureaucratic entity, you need it to be a legal citizen. But I’m pretty sure it won’t arrive in the mail until about six days before I head back to the States.

Instead, I get a receipt that functions as a CDS but isn’t. I still don’t know why they don’t just make the receipt the CDS; that would be much easier. But I guess that way, we wouldn’t have the fun of being officially, legally illegal for a number of months.

It doesn't end there, as it was arranged for all of the language assistants in Le Havre to arrive at 8.30am for an appointment at the Sous-Prefecture. Let me restate that - all 25 or so of us had an appointment for 8.30.

Of course, we all couldn’t be seen at that time, so they went alphabetically down the list. Three hours later, they arrived at "Spittler". Remind me to change my last name to "Alwaysinthefrontoftheline". I think it has a nice ring to it, don’t you?

Of course, it was the same way with the requisite doctor’s visit we had to endure. Big Brother in Rouen told us that if we were late for our doctor’s appointment, our heads would fall off and our left legs would rot away; then we would have to show up at a later date.

Of course, we waited two hours for the doctor to take us into a room one-by-one and say, "Really? You don’t smoke? I would if I lived in your city."

So with all these cartes and receipts and RIBs and arrêtés and God knows what else filling up my satchel and giving me back problems (I was instructed to have about 10 photocopies of each on hand at all times. I laughed, then I saw that they were serious), I thought it might be a good idea to give my aching shoulders a rest while I got connected with the rest of the world.

I tried to get an internet package.

I went into town to get everything set up, and the store told me I need to go next door to the other phone company to open up a phone line (why they can’t just do it is totally beyond me).

So I did just that, and they proceeded to tell me that, to start up a phone line, I need 16 forms of identification, proof of French nobility in my bloodline, a note from my mother, a blood test, a urine sample, a clean driving record, a certified mint-condition 1972 Nolan Ryan baseball card, an 18-page essay on the works of Proust, and an attestation de logement.

Well, I had everything but the attestation, so that trip was all for naught. Even after I got it, they told me to wait for two to three weeks for everything to work.

It’s now five weeks later, and I still don’t have the internet. But I have a stack of papers about five centimetres thick that the phone company sent me, telling me things that either I already knew or that were of no use whatsoever.

In the wake of all this bureaucracy, I almost reflexively pulled out my RIB and my passport at the bar to order a drink. Luckily, the bar is the one place in France that doesn’t involve paper and at least I’m not killing any more trees.