Monpazier and its tortured history

Monpazier and its tortured history 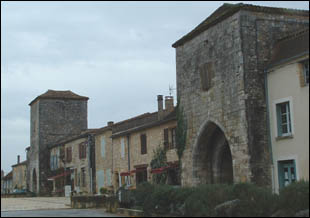 MANY of the towns and villages in the Périgord were built as bastides, strongholds on the major trade routes through the region.

One of the best is Monpazier with its fortified gates, streets laid out at right angles and covered arcades.

Although originally built to promote trade, with the heart of the bastide centred on the market square, many soon gained defensive walls and gates.

At Monpazier these gates can still be seen and they lead right into the market area.

Here you will find galleries with gift shops and coffee bars, and plenty of people picking up their morning bread. 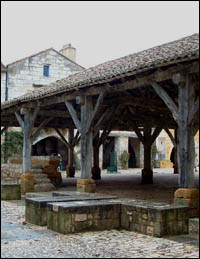 The timber, covered market has antique measuring equipment and the legs of the roof stand on stone plinths to protect them from standing water.

The history of Monpazier stretches back to 1284 when it was founded by the English king Edward I.

But it was situated on the frontline of the French/English border, with an opposite bastide built at Villefranche du Périgord, around 20km away.

It led a troubled existence with delays in its building, hostilities between Edward I and the lords and then 300 years later, the leader of a peasant revolt was tortured to death in the square.

If you walk through Monpazier to the other side there is a fine view out across the valley, and you can see why the bastide was built where it was.

Directions: On the D660 to the south east of Bergerac.

More things to do in the Dordogne
The Tuilières hydroelectric dam and fish lift
Milling around at the Filature de Belvès
A walk around Prats-du-Périgord, the Dordogne
Belves Medieval Fair - stepping back in time
Prats du Perigord, walk around the village